Why was Vulcan shown with moons in Lethe?

Let me begin by saying I haven’t seen the new series so I can’t speak to the general appearance of the “moons.” That said, while Vulcan has no moon, there are a few comments and sources of questionable canonicity indicating that it has a “sister planet” visible in its skyline.

The Animated Series episode “Yesteryear” featured a large object visible in Vulcan’s sky. When a preliminary sketch was presented to Gene Roddenberry, he wrote in block letters “NO MOON!,” but the instructions were either missed or ignored. 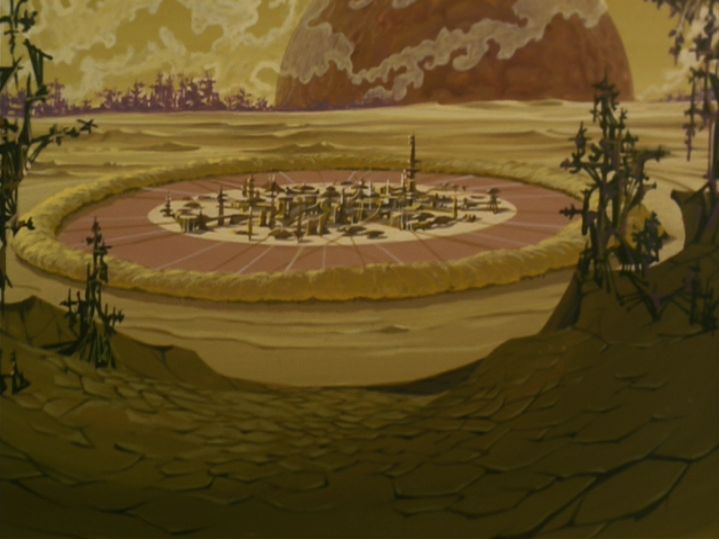 The Animated Series is as a rule non-canon according to Roddenberry, but he reportedly made an exception for this episode, given that Sarek later refers to its events in the TNG episode “Unification I.”

SAREK: No. I never knew what Spock was doing. When he was a boy, he would disappear for days into the mountains. I asked him where he had gone, what he had done, he refused to tell me. I insisted that he tell me. He would not. I forbade him to go. He ignored me. I punished him. He endured it, silently. But always he returned to the mountains.

(Per Memory Alpha both Roddenberry and “many other production staffers” consider the episode canon, but that claim is sourced to two fanzines I don’t have copies of. They’re usually good about such things though, and I’ll cite them throughout this answer.)

Confusing things further, Vulcan would later be shown with two things that sure as hell looked like moons in the theatrical version of The Motion Picture. 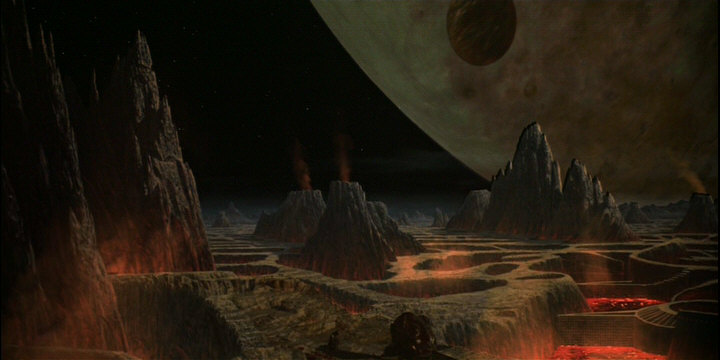 And then when Roddenberry wrote a novelization of the movie, it said that not only are there no other moons in Vulcan’s system, there are no other planets! (Don’t worry, the novelization isn’t canon. I’m just including this to indicate how confused the issue was.)

The “moons” were removed from the 2001 DVD version of The Motion Picture, but there are conflicting statements about whether it was for canon reasons. Memory Alpha has two quotes from two people behind its removal.

VISUAL EFFECTS ARTIST DAVE MORTON: “Vulcan has no moon, and there were all these planets floating around it in the original release. These new Vulcan shots were done mainly to match better with the other films.”

RESTORATION SUPERVISOR MICHAEL MATESSINO: “We eliminated things that you might not associate with a far-off monastic temple. We did not take our directions from a simple line of dialog. Vulcan in and of itself should be interesting without cluttering the sky. Besides, it was obvious that the sun was out in that scene. The change keeps things in the spirit of where we are going. It’s not about what’s up in the sky, it’s about what’s happening with Spock.”

So now you have another headache about whether the updated DVD version ought to erase the canonicity of the original film (ask Star Wars fans whether in canon, Han shot first) and whether it should matter if the moons were erased for stylistic reasons and not to “correct” the scene.

But even before that scene, there were 20-odd years of confusion about what exactly the objects in Vulcan’s sky was supposed to be. An explanation seized upon by fans was that Vulcan had a “sister planet” visible from space. Per Memory Alpha, there were two official reference books published in 1991 and 2002 that reported that information and named it “T’Khut” or “T’Kuht.”

But are the reference books canon? Oh boy, I hope you’re sitting down, because we just walked into another canon debate.

“Only the reference books (tech manual, encyclopedia, etc…) and two books by Jeri Taylor are considered canon outside the TV show and movies.”

“We do use things like the Encyclopedia, the Chronology, the Technical Manual etc. for reference, but unless it was explicitly mentioned on screen, we won’t feel bound by anything stated even in those books.”

tl;dr Star Trek canon is a complete mess, and it MAY be the case that Vulcan has large objects in its skyline depending on who and what you believe determines “canon.” I’ll note that there other elements Star Trek: Discovery– namely the holodeck— that only make sense if you assume the Animated Series is canonical to some degree.

The Defiant may be operating inside Federation lines, but they certainly don’t want to run into a Jem’Hadar raider while they’re on a time-sensitive mission of mercy, something that would substantially slow them down.

BASHIR: We’re a long way from the front lines, Worf. The chances of meeting a Dominion ship out here are negligible.

WORF: (to Sisko) We should not take the risk.

This presumably includes not broadcasting their position to all and sundry.